Does Politics Affect the Economy?

One of the big unexamined assumptions of many of the questions I have been getting recently is that politics matters to economics.

I get questions from both sides—how bad will it be if candidate X wins?

They all assume that candidate X, whoever it is, has the ability to significantly affect the economy and the markets.

But is that really the case? 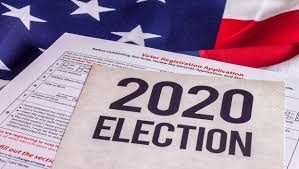 The chart below shows the size of the economy over the past 70 years. Unlike most charts used on the blog, I have created this one in constant dollars (i.e., it takes out the effects of inflation). Inflation makes growth in some years look much better than it really was. As such, using real dollars is a better measure of the actual size of the economy. I have also used a logarithmic scale for the chart, which is somewhat unusual in that a log scale better captures growth over time. In other words, this chart shows, in real dollars and percentage terms, how the economy has grown over the past 70 years. 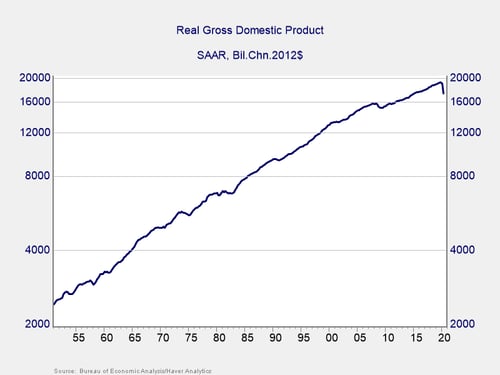 Steady growth. The first takeaway, for me, is how steady growth was over multidecade periods. From 1950 to the early 1970s, growth was steady. Growth then slowed (i.e., the slope got less steep) a bit through about the mid-2000s. Since then, growth has been a bit slower yet. In all that time, with occasional setbacks, growth has been steady regardless of the politics of the various administrations during those decades. Looking at the economy from a high level, you can’t even see the effects of politics.

External shocks. Maybe a better place to look, though, is where the slope drops off. We see that most recently and significantly in the coronavirus crisis, before that with the great financial crisis, and before that with the Fed’s crusade against inflation in the early 1980s and the OPEC oil shock in the mid-1970s.

These are the major declines over recent decades. In all cases, it was an external shock that generated the crisis and the decline. Yes, you could certainly argue that the political response exacerbated the effects. But in all cases, the crisis itself went beyond politics.

So, Does Politics Affect the Economy?

If we look at politics in isolation, the effects on the economic growth rate, over the longer term, appear very limited. Does politics have an effect on the economy? Of course. Is that effect significant over time? Not from a long-range perspective.

This discussion is as close—maybe closer—to politics as I like to get. I am not arguing for (or against) any individual politician or policy, which may well have had economic effects at a given time. I am saying that, as an investor with a multiyear time horizon, history shows that the effects will likely even out over time.

You can see this with more immediate data as well. When Obama was elected, I got many calls asking what to do when the economy and stock market collapsed. When Trump was elected, I got the same calls, albeit from a different set of people. And, in the leadup to this election, I have been getting calls from both sides, each convinced that the end is near if the other side wins.

Look at the Long Term

From an economic point of view, growth comes from population gains, reinvestment of capital, and technological improvement. Regardless of who wins, all of those factors will continue. So, my response to the Obama panic, the Trump panic, and the current panic is the same: look at the long term. Growth will continue.

This kind of analysis, and context, is key to what I laid out in my earlier post on how to remain calm. If we look back over time, we can see what is most likely to happen and why. Who wins the election certainly matters. Vote for your chosen candidate, because it is important. But one of the key reasons behind the success of the U.S. economy is the fact that it is largely independent of politics.

Thank goodness for that.

Brad McMillan is chief investment officer and a managing principal at Commonwealth Financial Network®, a Registered Investment Adviser–broker/dealer based in Waltham, Mass., and San Diego, Calif. He is the primary spokesperson for Commonwealth’s investment divisions.

Brad is a frequent commentator on the financial markets, U.S. economic policy, and the global economy for a range of media, including the Wall Street Journal, CNBC, CNN International, Barron’s, and Bloomberg News. He is the author of Crash-Test Investing, a must-read primer for Main Street investors seeking to help insulate their portfolios against a market crash. And he writes daily on his blog, The Independent Market Observer.

Get Financial News & Updates Delivered to Your Inbox