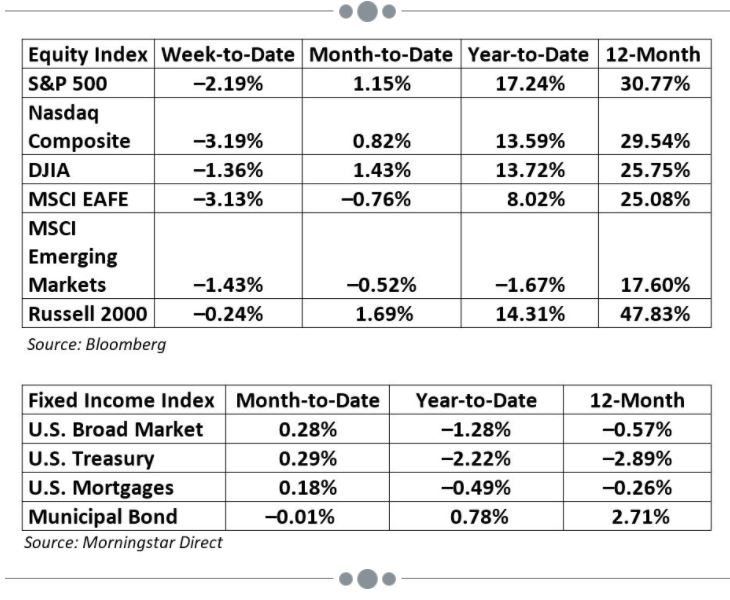 What to look forward to...

On Tuesday, the Conference Board Consumer Confidence Index for September is scheduled for release. Consumer confidence is expected to increase modestly, with the index set to rise from 113.8 to 114.2. If estimates hold, the index would remain well above last year’s lockdown-induced lows, signaling healthy levels of consumer confidence. That said, we saw confidence decline in August due to rising medical risks, a slowdown in hiring, and rising inflationary pressure. Still, there is some evidence that consumer inflation started to cool in August, including the Consumer Price Index slowdown. Historically, higher levels of consumer confidence have supported faster spending growth. Any improvement for the index would be welcome, even if it’s only the modest uptick expected by economists.
Thursday will see the release of the initial jobless claims report for the week ending September 25. Economists expect to see 330,000 initial claims filed during the week, which would be an improvement from the 351,000 initial claims filed the week before (but slightly higher than the low of 310,000 initial claims recorded earlier in the month). Although we’ve made solid progress in getting initial claims down this year, the labor market recovery may be tested soon by less-supportive Fed policy. With many economists expecting the Fed to start tapering its asset purchases by year-end, the tailwinds from supportive Fed policies are set to diminish over the months ahead. Given the large number of folks still out of the labor force and the relatively high unemployment rate compared with pre-pandemic levels, employment and initial claims reports will continue to be closely monitored.

Friday will see the release of August personal income and spending reports. Spending is expected to increase by 0.7 percent, following a surprise 0.3 percent increase in July. The previously released August retail sales report showed spending on goods beat expectations, which helps explain the anticipated acceleration in spending growth. Personal income is expected to have increased by 0.2 percent in August following a 1.1 percent rise in July. Personal income growth has been highly volatile throughout the pandemic as shifting federal government payments have caused large monthly income swings. Strong wage growth is expected to offset the impact of more states pulling out from federal unemployment programs in August. Looking forward, labor shortages and high levels of job openings should support continued wage growth and increased spending.
We’ll finish the week with Friday’s release of the ISM Manufacturing index for September. This widely monitored gauge of manufacturer confidence is expected to decline from 59.9 in August to 59.5 in September. This is a diffusion index, where values above 50 indicate expansion, so this result would signal continued growth for the manufacturing industry. Last year, manufacturer confidence rebounded swiftly once initial lockdowns were lifted; even with a modest decline in September, the index should remain well above pre-pandemic levels. High levels of buyer demand supported manufacturing confidence throughout the year despite headwinds raised by supply shortages and higher prices. If estimates hold, this release will represent an encouraging signal that manufacturers remain confident despite industry headwinds. As is the case with consumer confidence, higher levels of business confidence have historically supported spending growth. If we get the high level of manufacturer confidence expected in September, this result will signal that manufacturing recovery remains on track.

To create a more secure login process in Investor360°®, multifactor authentication (MFA) will be required for all users (mobile and desktop platforms) beginningSeptember 9, 2021. What Does This Mean?When you log in after September 9, you will be asked to set up MFA in Investor360° on either a desktop browser or mobile app. A set of instructions will appear on your desktop or mobile device screen to assist you with the setup process. If you would like to reference these steps ahead of time, we have attached an Investor360° Mobile Reference Guide, which will show you how to sign up for MFA on desktop or the mobile app. Want to Download Investor360° Mobile?On your mobile device, you can download Investor360° Mobile from the Apple Store or Google Play. Questions?

Our first priority is helping you take care of yourself and your family. We want to learn more about your personal situation,, identify your dreams and goals, and understand your tolerance for risk. Long-term relationships that encourage open and honest communication have been the cornerstone of my foundation of success.

Get Financial News & Updates Delivered to Your Inbox